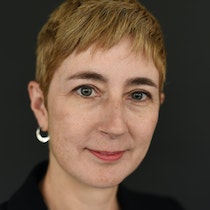 Darla Crispin is a pianist, scholar, lecturer and academic leader who has worked in all these fields in a variety of countries including Canada, the UK, The Netherlands, Belgium and Norway. She is currently Director of the Arne Nordheim Centre for Artistic Research (NordART) at the Norwegian Academy of Music (NMH), Oslo.

Born in British Columbia, Canada, Darla took her BMus at the University of Victoria before moving to the UK for her advanced studies. She gained a Concert Recital Diploma from the Guildhall School of Music & Drama, London and an MMus and PhD in Historical Musicology from King’s College, London.

After a period working professionally with a variety of contemporary music ensembles in The Netherlands, she turned her emphasis to teaching and scholarship. She was responsible for developing postgraduate programmes at the Guildhall School and, later, at the Royal College of Music, where she established, and was the first Head of, the RCM Graduate School, being granted the title of HonRCM in 2009.

Darla’s research focusses on musical modernity, and especially on the music of the Second Viennese School. Her most recent work examines this repertoire through the prism of artistic research in music, a process which has been reinforced through her work as a Research Fellow at the Orpheus Research Centre in Music [ORCiM] from 2008 to 2013.

She is sought after for her experience in the developing field of artistic research, as a regular advisor for the Norwegian Artistic Research Programme. As well as publishing many articles and delivering numerous conference papers, she has given invited presentations at international events in places as diverse as Singapore and Montréal, Canada on artistic research, its development in higher music institutions and its relevance to her own work.

She is currently working on a book entitled The Solo Piano Works of the Second Viennese School: Performance, Ethics and Understanding (Boydell & Brewer).

Darla’s publications include the following:

Projects Darla May participates in