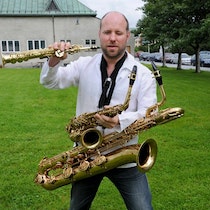 Norwegian saxophonist born in 1975. Nominated to the Nordic Council Music Prize 2011 (previous nominees are a.o.Bjørk, Kaija Saariaho, Esa Pekka Salonen,Jan Garbarek & Christian Lindberg). About Nystrøm the jury writes: Rolf-Erik Nystrøm, saxophonist; born 1975, despite his young age, is one of Norway’s most award-winning and internationally active musicians. His unique technical talent gives him a timbre control that blows most people’s notions of what is possible on a saxophone, to a degree that makes the saxophone as an instrument almost subordinate to his personal expression. Nystrøm’s range spans from being a soloist with the Oslo Philharmonic Orchestra and a number of other Nordic and international ensembles, to receiving specially written music from composers such as Luca Francesconi and Richard Barrett, to name a few. In addition, he co-operates with leading performers in various folk music (Senegal, South-Africa, Tadjikistan, Egypt, Brazil, Ivory Coast, China, Norway, Sri Lanka) and tours with world with them.

Not to be forgotten: He also signs his own improvisation-based compositions. Far from being a superficial cross-over artist, on the contrary, he makes his mark by an unusual ability to orient himself in new musical situations; to be 'in the style' and contribute with a personal, pioneering expression. Rolf-Erik Nystrøm makes an impression indeed.

Not only does he impress his audience with extraordinary control and technique – as if the instrument were an extension of his own body – but he impresses them also with his absolute presence in what he does. And he makes an impression on those who work with him, whether they are involved in contemporary music, black metal, ballads or folk music. The reason we find his name on such a diversity of recordings is that he possesses an intuitive instinct for the style and inner logic of the various genres, and has the ability to perceive and pass on the subtleties and richness of great music in all its guises. So when composers write music for him, one should not expect conventional “contemporary music for saxophone”. Rolf Wallin (composer)

Rolf-Erik Nystrøm has strongly made his mark both on the saxophone and as a composer and improviser, and he keeps himself very active without compromising on quality.

His latest solo album was nominated for the Norwegian Grammy Award (Spellemannprisen 2006). When Rolf-Erik Nystrøm received the Young Musicians’ Lindeman Prize in 2005, the composer Rolf Wallin commented: ‘His appetite and keen interest in music in all its shapes catches the audience, and through a refreshing lack of self-pretensciousness, combined with an intense and concentrated stage presence he opens the listener’s ears for the new sounds being performed.’ An apt comment on the chief characteristics of one of Norway’s most versatile young musicians, by a composer who knows him well. Nominated to The Nordic Council’s Music Prize 2011.

Festival profile at the Nordland Music Festival Week August 2012. Handpicked by the Astrup Fearnley Museum to make and play a piece for the opening of the Renzo Piano building in 2012. In 2011 he was artistic director and artist in residence for the Ultima festival together with Frode Haltli & Håkon Thelin in Poing, and Luca Francesconi. Soloist with the Oslo Philharmonic in 2013, 2010 & 2000. Telemark Chamber Orchestra in 2011 & 2013. Released his first soloalbum “Concepts of Sorrows & Dangers” in 2006 with works by Rolf Wallin, Francesconi, Xenakis, himself, Maja Ratkje, Trond Reinholdtsen, Øyvind Torvund & Lars P.Hagen. The album has received great critical acclaim in the most important Norwegian newspapers.

He gives lectures in “consciousness in presenting art and contemporary music” at the the Norwegian Academy of Music and all around the world. Participated on more than 100 albums, and works also as a producer on other artists’ records. In addition to perform contemporary music, he also regularly performs west-African, falak, Chinese, Japanese, improvised, jazz, funk, zar and early baroque music. In 2012-13 he has concerts in Tadjikistan, England, Brazil, Lithuania, Russia, Canada, Belgium, Germany, France, South Africa, USA, Switzerland & Scandinavia.