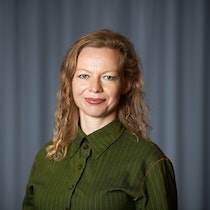 Tanja Orning is a cellist, music researcher and composer from Oslo.

Orning specializes in working with and performing new and experimental music, including both notated and improvised music. Orning studied at the Norwegian Academy of Music (NAM), in London with William Pleeth and in the USA with Janos Starker as a Fulbright Fellow (MA in Performance at Indiana University). Orning held the position of co-principal cellist in the Stavanger Symphony Orchestra (1994-2000) while teaching at the conservatory. She left her orchestral job in 2000 to realize her own musical and interdisciplinary projects as a performer, improviser and composer, alone and in various ensembles: Cellotronics (solo), asamisimasa (Norwegian Grammy 2012 and 2015), Kyberia duo, Ametri string quartet, Oslo Sinfonietta, Christian Wallumrød Ensemble, Boa trio, Dr. Ox duo, Wunderkammer, Sound of Movement with dancer Ellen Johannesen and the Performance Group Mobile Homes. She regularly plays with the Lemur ensemble, Oslo Sinfonietta and Ensemble Ernst. As an improviser, she has been part of the improv community in Norway in collaboration with e.g. Lemur, Christian Wallumrød, Trygve Seim, Michael Duck, Lene Grenager, Ståle Storløkken, Eivind Lønning, Kjetil Gutvik, Natasha Barrett, Per Zanussi, Helga Myhr.

Orning has participated in a number of recordings of contemporary music, and in 2005 she released her solo album Cellotronics (Albedo). In 2000, she received a 2-year Government Grant for Young Artists. She is the jury leader for the Arne Nordheim Composer Award established by the Ministry of Culture. She has several years of experience as a committee member and leader in the Norwegian Cultural Council. Orning has a doctorate in the field of performance practice from NAM (2014). The dissertation "The Polyphonic Performer", examines how the role of contemporary musicians is expressed and understood in different contexts, and how this is expressed in experiences with performers. This was investigated through practising and performing cello solo works by Helmut Lachenmann, Morton Feldman, Klaus K. Hübler and Simon Steen-Andersen. She worked as a postdoc at the Norwegian Academy of Music 2015-20 in a project "Towards a new performing role in the 21st century. A study of the portfolio musician's qualification requirements in a globalized work and music life." Orning worked as an associate professor and researcher in modern music history, performance practice, work interpretation and aesthetics at the University of Oslo from 2014-2015. She was also employed as an associate professor at the Barratt-Due Music Institute 2014-2015. At the Norwegian Academy of Music, she teaches contemporary music, development of artistic projects, and she supervises Master students and Artistic research fellows. Orning is also appointed Professor of Classical Music Improvisation at the University of Agder.