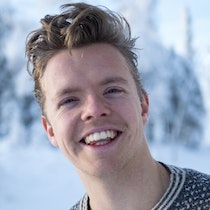 Instrumentalist, improviser and composer Kalle Moberg have excelled as one of Norway’s most promising musicians. He performs widely as a soloist and chamber musician in classical and contemporary music and as an improviser ranging from freely improvised music to jazz and has been touring in America, Mexico, Japan and Europe.

Besides his Bachelor's degree studies in classical music at the Norwegian Academy of Music (2013–2017), Moberg held the position of kapellmeister at The Norwegian Royal Palace. He then left Norway for a Master's degree in classical music performance in Bern, Switzerland, under Teodoro Anzellotti (IT) at Hochschule der Künste Bern (2017–2019). Moberg is now back in Oslo and performs internationally in projects with musicians such as Jim O’Rourke (US), Eiko Ishibashi (JP), Mat Maneri (US), Philipp Wachsmann (UG), Paul Lytton (EN) and Paal Nilssen Love (NO) amongst others.

Even though the majority of his appearances is in different contemporary music settings, he’s also active within more traditional kinds of music – both classical and early music, as well as folk music.

Music, biography and more at kallemoberg.com.