Being on an exchange programme from the other side of the world is not always easy, and during a global pandemic processes that were already complicated enough become even more difficult. Having an admirable level of energy and perseverance makes all the difference.

Uviwe Caso (21) gives a big smile in the Zoom window. His optimism is like a fresh breeze compared with all the Norwegians who are weary of working from home. He has travelled all the way from Cape Town, South Africa, to the Norwegian Academy of Music (NMH) in Oslo to study jazz guitar.

It’s 12 degrees below zero outside, the coldest day of the winter so far, when Caso is finally finished with his travel quarantine. When he left Cape Town the temperature there was 29 degrees above zero.

“It’s so cold! I’m trying to get used to it, but I need a little more time,” he says about the temperature difference.

Caso normally studies at the South African College of Music, which is part of the University of Cape Town. He is in his fourth year of studies, and will be staying in Oslo until the summer.

“I have to go and see what’s happening in Norway, I thought.” 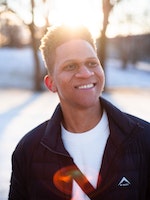 It was pure chance that brought him to Norway. He had forgotten that the school arranged auditions for exchange programmes, and was sitting together with some friends when someone passed by and happened to mention the audition casually. The young guitarist jumped into it without much preparation, and ended up as the only applicant to be accepted as an exchange student by the NMH.

“I called a few friends, one on drums and one on bass, and did a trio version of a song that we decided on right then and there. And then I was the one who was chosen!” he exults on Zoom.

A few years ago, at a jazz festival in Cape Town, he heard a Norwegian band featuring a guitarist he really liked.

“It was so good, and completely different from how we play in South Africa,” he explains. “I have to go and see what’s happening in Norway, I thought.”

Caso tells us that they learn mostly about swing, be-bop and jazz standards at the University of Cape Town. He wanted more freedom and space to play his own repertoire and to experiment. He is hoping to be able to do that in Oslo.

A spanner in the works

This is not the first time that the Georgian flautist Levan Chkhaidze (23) has been in Oslo. He was an exchange student while studying for his Bachelor’s degree in 2018, and now he is back to complete his Master’s. He says that both his fellow students and the international office advised him to study at the NMH this time, too.

He had originally applied for a Master’s programme as a normal student, but due to the pandemic it was impossible for him to travel. When he was given a place as an exchange student through Erasmus, he lost the autumn semester for the same reason. He finally arrived in Norway in January.

Choir conductor and pianist Eduardo Villamizar (27) has travelled the farthest of all. He is an exchange student from Universidad de Los Andes in Mérida, in the west of Venezuela.

“It’s also a cold city, but not as cold as this,” he says, glancing at the snow-covered bicycle stand outside the window. Mérida is situated over 1600 metres above sea level.

Villamizar doesn’t really remember how he got started in choir conducting , but he believes that at some point he must have raised his hand to volunteer when nobody else would. From that point onwards it has been non-stop.

“I didn’t choose Norway; Norway chose me,” he says about why he came on an exchange here. In 2018 he participated in World Youth Choir, or Coro Mundial, as he calls it. He met some students from the NMH there. The school’s programme in choir conducting suited him perfectly, and he found Norwegian music appealing.

“It’s so beautiful. My Norwegian friends played an album for me that I really fell for,” he explains. The music was White Night: Impressions of Norwegian Folk Music, featuring the Norwegian Soloists’ Choir with NMH professor Grete Pedersen.

Uviwe Caso discovered that it was not easy to complete an exchange application while on tour in Germany, and already far from home. His access to the Internet was limited, and technical problems faced him in rapid succession. But what was worse was that it was impossible to book an appointment with the caseworker responsible for issuing a visa.

“My departure date was getting closer and closer, and I still hadn’t even been able to get an appointment,” he says.

For a while his daily life consisted of sending mails, calling, or simply arriving without an appointment and explaining his situation. Two weeks before his departure he finally managed it.

“In addition, it took a long time for the Norwegian Directorate of Immigration to process the application, and if you make one mistake they can reject the whole thing,” he says, waving his arms. “What a lot of stress! But luckily it all worked out.”

Were you ever tempted to just give up the whole thing?

“Yes and no, but giving up would have meant wasting so much energy,” he says, adding that it is part of his philosophy – if you get halfway through something, you might as well finish it.

Nearly two days on a bus

Levan Chkhaidze did not come from as far away as the other exchange students. All the same, the project sent him far away, in an entirely opposite direction. Usually Georgian citizens must leave the country in order to receive permission to study abroad. They take a direct train from Tbilisi to their neighbouring country, Azerbaijan, but now the border was closed due to the coronavirus. So Chkhaidze had to take a bus to Ankara in Turkey. It took 18 hours – one way.

Georgia was in the midst a total lockdown, too, and anyone who wanted to leave the country had to apply for permission first. The ordinary buses were cancelled, but Chkhaidze managed to find a place in a private minibus. It drove to Turkey with covered windows, and Chkhaidze suspects that the driver did not have the same permission to leave as he himself had received.

“I really wanted to travel. That was the main reason why I went through the process despite everything,” he says.

Eduardo Villamizar didn’t even have a current passport when he applied for a travel visa – a phenomenon that, unfortunately, is not unusual in Venezuela, a country marked by inflation and corruption.

“Thousands of Venezuelans try to renew their passports, but it costs between one and two hundred dollars, or thousands on the black market. The minimum wage is four dollars a month, so in practice it’s almost impossible.”

Now there is only one semi-open office in the entire country that issues passports. The other ones are closed because of the pandemic.

But after standing in mile-long queues, making unsuccessful trips and pestering enough people, Villamizar’s passport was renewed – one month before his departure date.

Living expenses and airline tickets were an additional outlay, and Villamizar had no other choice than to ask for donations. He set up a campaign on GoFundMe, and got friends and family members to share it on their social networks.

“I got help from so many people. If you had told me a year ago that I would be able to come here, I would have said that it was impossible – not a chance.” 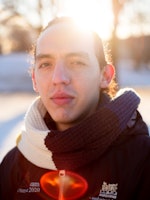 “I got help from so many people. If you had told me a year ago that I would be able to come here, I would have said that it was impossible – not a chance.”

He ended up with nearly three thousand dollars, including one thousand from an anonymous donor whose identity remains a mystery to him.

“If it hadn’t been for that person I wouldn’t have been able to buy the plane ticket.”

You had to celebrate, didn’t you?

“Yes, but it’s when it seems farthest away that you’re most geared up. When it actually happens you realise it more gradually. Even though I’m here now, I can still hardly believe it.”

“I don’t want to stay in one place too long,” says Uviwe Caso, who regards the influences from other musical cultures as the most important part of his musical journey.

“I want to learn jazz from as many cultures as possible, experience the differences and be able to compare. The more we musicians listen, explore and let ourselves be affected by different sounds, the more we can define our own sound.”

Levan Chkhaidze didn’t lose his nerve when he lost his place in the Master’s programme. He has already applied again, and will audition in March together with several other applicants. His dream is to play in an orchestra.

“In the Oslo Philharmonic, for instance,” he says, with a twinkle in his eye.

Eduardo Villamizar will also apply for a place as a regular student. He says that for Venezuelans, getting out of the country is at the top of the list. Also for family members that have remained there, because then they can get financial help. That is how most people in Venezuela get by, according to Villamizar. It doesn’t matter if you are a professor or a doctor.

“Most people want to get out. And they can’t or don’t want to go back.”

He feels at home in Norway after only a few weeks, and makes a list: He already has both Norwegian and Venezuelan friends; school is fantastic; there are a lot of good things going on. Compared with the situation at home, he doesn’t find remote learning difficult, and he dreams of conducting his own choir, playing chamber music and composing – simply being a versatile musician.

“I think I’m going to be very happy here,” he says with a smile.