Students at the Norwegian Academy of Music are still dreaming of a year abroad, even if infection prevention measures are presenting an unforeseen challenge.

“Things came to a sudden stop just when everything had begun to run smoothly. The Norwegian Academy of Music called and said they would pay for my ticket back to Norway, as it had become too risky to stay in Austria. So I just had to leave it all behind and go home to the snow and forests,” says Ragna Rian.

As early as Ragna’s first visit to Vienna at the age of 13, she knew that she would live there someday. There was something special about the city – something almost pulsating. The young violinist was entranced by the beautiful architecture, the classical music that seemed to radiate from every corner, and the pleasure of strolling through the same streets that all the great composers had once walked. The pride of the people living there now was palpable.

In the course of her first year of study at the Norwegian Academy of Music for a Bachelor’s degree in classical performance, Ragna felt increasingly rootless, unable to find a real direction in what she was doing. She began to think about Vienna again. She was longing for a place to put down roots. In her second year Ragna decided to apply to the University of Music and Performing Arts, Vienna (MDW) through the EU’s student exchange programme, Erasmus.

“The Academy gave me the help I needed to apply. So then I just left,” she says.

“But I had to learn German from scratch. I left for Vienna in September, and classes were going to begin in October. I had four weeks, and had been given financial support for a language course. It turned out fine. I was very motivated to learn German, also because language is a gateway to culture,” Ragna explains.

Luckily, Ragna likes talking to people. She went to concerts, and in the intermissions she initiated conversations with people she had seen in the hallways at school. She chatted away in German, becoming more fluent with every word.

“One girl had started a wide-ranging Erasmus chat on Facebook. It was very successful. If somebody was going out for a beer, or to a concert, everyone knew about it. All in all, it was very different from Oslo – there were many more concerts,” she continues.

“And much more beer.”

Eventually Ragna became part of a community of young musicians and composers. She describes herself as lucky. She moved away from the cold studio flat she had organised before leaving Oslo, and into a more comfortable flat in the city centre, in the area where Beethoven had composed his Ninth Symphony.

Ragna Rian travelled through the city early every morning. She wanted to be at school by 8 am to secure a practice room. The rest of the day she went to classes, met up with friends, went to chamber music practice. She auditioned for an orchestra. She had a multitude of concert plans.

Then the coronavirus arrived.

“There were so many exciting things I had planned to do. Things that meant a lot to me. Everything was cancelled. I had to go home to Norway. It was really very sad,” Ragna says.

She quickly realised that there was no point in trying to recreate Vienna in Norway. She tried not to think about all the concerts that were never going to happen.

“Luckily I had teachers at the MDW who insisted that this might be a good opportunity to accomplish all the things one normally doesn’t have time to do,” she explains.

“In my experience, the professors in Vienna were extremely solution-oriented. Something entirely new arose from the corona situation – something I hadn’t expected.” 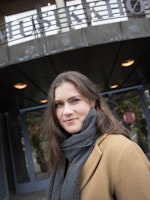 “In my experience, the professors in Vienna were extremely solution-oriented. Something entirely new arose from the corona situation – something I hadn’t expected,” she says.

At the end of June, Ragna returned to Vienna. The school had extended the semester by one month. The students were getting a chance to catch up with the instruction they had missed.

“And I was given a place in the orchestra I had auditioned for in February. We presented one of the first concerts in Austria after the country had begun to open up again. Even the President came,” says Ragna.

When Eirik Sanner went to Lucerne, Switzerland, as an exchange student in August, he knew that things would be different.

“In my assessment of the situation I decided that it didn’t matter where I was as long as I stayed in one place. I was a little anxious about things like insurance, but when that was organised I actually had no doubts,” he says.

Switzerland is not a member of the EU, but offers a programme that is the equivalent of Erasmus. Eirik is an exchange student for his first year of the Master’s course in performance, with the euphonium as his principal instrument. What was most important for him was that the school in Lucerne was certain to have live instruction.

“As long as I have my lessons and a place to practise, I’m happy. Of course concerts are important, but Switzerland has been in more or less the same situation as Norway right from the start, so it really makes very little difference in that respect, either,” he explains.

As a young musician in Oslo, Eirik led a life that was full of obligations. He played in an amateur band and had freelance jobs in addition to maintaining contact with his family and friends. The exchange programme was an opportunity to “bury himself” in his instrument, as Eirik describes it.

“Here I can be a real nerd 24 hours a day, and just do my own thing. Besides, I wanted to see what it was like to work with another teacher. Thomas Rüedi has been one of my heroes when it comes to performing – he is one of the great soloists on my instrument. I wanted to learn from him, to understand why he does the things he does,” Eirik explains.

When he was planning to apply for an exchange programme, Eirik found the Academy to be very helpful with organising and following up the application process. He notes that there are quite a number of partner schools around the world, so there are countless opportunities to be inspired by other approaches and other techniques.

“It took some effort to get started, but when the process was underway I got the help I needed from the Academy. When it came to a place to live, I just clicked on “Yes, please” in the application form, and everything was taken care of. I’m living in student housing just outside the city centre, and cycle to school every morning. I’m very pleased to have avoided getting involved in the real estate market in Switzerland,” Eirik continues.

With a mask in the corridors

All instruction at school is carried out in German. Eirik Sanner was also offered financial support for a language course, but as the students had to take the course in the country where they would be studying, it vanished in the midst of the “corona-muddle”, as Eirik calls it. He had to get by with his upper-secondary-school German.

“It’s improving slowly but surely,” he says. “We have several discussion subjects, where we talk about music with each other. In those classes I only speak English, and the others think that’s just fine.”

Eirik describes how the infection control measures make it a little more difficult than normal to get to know people. There are not as many social events as before, and at school wearing a mask is required every time you leave a classroom.

“Developing a social life is a slow process now, partially due to the masks. It’s not always easy to hear what people are saying, and I can’t always tell who it is I’m seeing in the corridors,” Eirik says.

All the same, Eirik Sanner praises the classroom community as one of the most positive surprises of his exchange experience so far. During the first years of his Bachelor’s studies at the Academy there were only two euphonium students in his class, later three. The situation in the school in Lucerne is very different: here there are eight altogether.

“The sense of community here is fine, and the people are terrific. We all practise the same piece every week, and every Wednesday one person is responsible for teaching everyone in the class something new. I was the first, and took the opportunity to tell the class about my daily routines,” Eirik says.

“I look at this year as an opportunity to develop my artistic practice.” 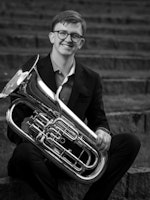 “When you don’t have any obligations, it’s important to have some structure in your daily life. That way you don’t end up sitting inside, doing nothing. I think I’m beginning to understand how I function in conditions like these. I have never lived so far away from home before. The practical and logistical details of daily life are beginning to fall into place,” he explains.

Eirik tries to get to school by 7 am, because then it is easier to find a practice studio. He practises for a few hours, and when his lips get too tired to continue he takes a break. Sometimes he exercises, a new activity he has taken up recently. Then he returns to school, where he listens to music, writes, does schoolwork. He goes to seminars or lectures. It is not until people start going home around 5 pm that he practises for two more hours. Afterwards he cycles back to his student housing.

“I look at this year as an opportunity to develop my artistic practice. I have chosen a group of subjects at school that are helping me to do this, and a teacher who does the same. Now all that’s left is for me to find the optimal way to spend the other 20 hours of the day so I can reach my goal,” Eirik concludes.