We should stop expecting theatre to always be entertaining. It can undermine the deeper meaning, according to Bjørn Erik Haugen.

Bjørn Erik Haugen’s office is crowded. Very crowded. A drum kit takes up half the floor space –and he does not even play the drums. The rest of the room is strewn with notes and documents. Most of them come from the Stasi archives in Berlin. A child’s drawing and photos of his daughter share the wall with Post-its and even more Stasi papers. While working on his research project The Use of Human Beings, the 39-year-old visual artist, composer and NMH researcher was granted access to old Stasi documents – which he then turned into music theatre.

“The title sums up what I’m working on: disproportionate power. Some people in power exercise control over others, be it through entertainment culture, probing eyes or information they hold on them; be it the Stasi as an agency for controlling people, creating new people, communist people; or be it orientalism, which cements the Western view of other cultures as primitive.”

His aim is to establish whether it is possible to create political music theatre in this day and age which “disseminates and problematises political and ideological ideas and reflections”.

“I’ve been told that my hypothesis is a modest one,” he smiles cautiously. “I've always enjoyed working with music theatre. It brings together multiple arts disciplines. I trained as a visual artist, and many artists in my field are also involved in theatre. I had an idea about how I could approach it, and then my hypothesis fell into place and overlapped with what I wanted to do.”

The first of the four performances conceived by Haugen to find out whether there is still a place for political music theatre was staged in the run-up to Christmas last year. He admits that the format was somewhat challenging for the audience.

“It was a reading of the files. Lasting one hour and 45 minutes – with auto-tune. Mild auto-tune to emphasise external coercion, to force it into pitch. I found three German actors to do the reading.” Haugen laughs.

“I want to convey ideas through music theatre. At least that’s what I’m trying to do. I don't know how successful I’m being.”

“I mean, half the audience walked out of the Stasi performance...”

“Yes. It was quite late in the evening. And rather dry. The reading, that is. But it was possible to find meaning in it.”

And those who stayed, why did they stay?

“I don't know. Some people appreciated it. A professor of theatre direction thought it was great. Going to the theatre, a concert or an exhibition is not always fun. We have to stop expecting it to be. If we focus too much on being entertaining, I think the content will come to suffer.”

“I've always enjoyed working with music theatre. It brings together multiple arts disciplines. I trained as a visual artist, and many artists in my field are also involved in theatre. I had an idea about how I could approach it, and then my hypothesis fell into place and overlapped with what I wanted to do.” 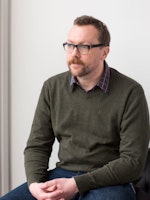 Bjørn Erik Haugen is rocking on his chair, which is crying out for oil. His office is crying out for light. Yet the setting could well be inspiring for someone who loves dusty old archives. Thoughts of the Stasi come easy in here. Maybe it is not as easy to quit.

“When I first read some of the Stasi papers it reminded me of Norway in the 80s when I was growing up. Somebody was wielding power and making decisions. The shops would close. We had one TV channel. There was control.”

Haugen is fascinated by archives. To him, getting access – or at least an insight – into the Stasi archives is Christmas come early.

“I’m fascinated by archives generally. Think about the huge volumes of paperwork that have been generated, and about the suspicion. This is the ultimate archive! It’s astonishing to see how much has been stored, how much of their GDP was spent on watching other people. There’s a lot to be discovered in these stories, so many destinies.”

Did you have any emotional reactions when you started delving into the material?

“I did, because these are documents you’re not supposed to read. Who is it for when somebody keeps watch on a person, opens their file, keeps adding to it? This insight into how they view their surveillance targets, this highly bureaucratic, almost derogatory language they use surprised me a little – because I’m not meant to see it. It’s meant for the archives. For further action to be taken.”

“I was on a brief guided tour. It’s strict: you have to be doing research or art to get access.”

Check, check! Haugen was involved in both. He had the documents sent to him. A selection of 648 pages. Chosen by one member of staff, then passed on to another for further shortlisting, then censored by a third. The Stasi continues to employ people in a way.

But how did you decide which documents you wanted to see?

“I was lucky to come across someone who spoke Norwegian. ‘What would you like?’ she asked. It was a bit like going on the internet for the first time and just... can I google whatever I want? Ha ha. So it was a bit random.”

He settled on an informant whom Der Spiegel had written about, one with a bright and burgeoning career in the Stasi ahead of him, but whose prospects ended abruptly when he was accused of driving a pirate taxi. He also picked a punk bass player who thought it better to become an informant than have punk banned by the authorities.

“It’s a strange insight into other people’s lives and destinies through the medium of bureaucratic language.”

Despite the drab views and his impassioned fascination, Haugen has managed to make headway with his project. And now he is turning to Hollywood, a much more glamorous prospect, perhaps.

“I've collected films containing examples of the ‘Western Gaze’: a white person observing a foreign culture and his reactions to it.”

In this case it is a white person observing other cultures playing the drums. In autumn 2018 the project will culminate in a concert with the percussion ensemble Sisu.

“The premise is that when unfamiliar or exotic cultures are being portrayed, it often involves drums. So eventually I found around one hundred films. I’ve put together the scenes with drums in them. They will be played without the film’s soundtrack, and the dialogue and rhythms will be performed by Sisu.”

“True, although I watched every film with half an eye. I have a love-hate relationship with research. It’s an exciting phase where you keep discovering new things. What’s less excitingis writing down the notes from all those films. It’s been an intense two months.”

It’s a formidable team you’ve signed up on percussion.

“Yes, I’ve been very lucky. It feels like I’m making a child’s ugly drawing, and they come along and create magic out of it.”

But how does Hollywood fit into Haugen’s quest for disproportionate power and the significance of political theatre?

“I find that the entertainment industry cements what we feel about things. Racist films were being made well into the 2000s. Take Dances with Wolves. Maybe I’m misreading it, but Kevin Costner is living with Native American culture in the film. When he meets a woman and marries her, she’s a white American taken by the Indians.”

“I think there is something there. I’m not trying to agitate, just show things the way they are. I don’t offer an interpretation. I just find Hollywood scenes that repeat themselves.”

Wall Street and the Sermon on the Mount

Although his project is not due to be completed until 2020, Haugen only has until this summer to prepare for his third performance.A film by Jean-Luc Godard will be coupled with a scene from the film Weekend.

“It’s a kind of dystopian film where the liberation that followed the protests of 1968 has turned into something aggressive, something amoral, with everyone doing what they want. I’ll also be using a speech given by Žižek on Wall Street where the police cut the power. He shouts, and the audience have to turn around and repeat what he is saying to those behind them. That must’ve happened during the Sermon on the Mount, too, I’d imagine. It must be an old, lost technique.”

Into this mix is also thrown an interview with the psychoanalyst Wilhelm Reich about circumcision of young boys.

“It’s all a bit up in the air still; I wish I could find a motif. I usually have a very clear idea,” Haugen laughs nervously.

The only thing that is certain is that by 3 June this will have turned into a performance in Copenhagen with an ensemble from Hamburg. In fact, Haugen is more in control of the very last music theatre performance he is creating as part of the project The Use of Human Beings.

“We’re removing the sound from a film called Zulu, a British costume drama about how the Zulu empire was defeated in Africa, and creating a brand new story. New sound and new dialogue.”

He is working with what he refers to as his theatre band, comprising Johan Harstad and Håkon Vassvik. They will also be collaborating with the contemporary music ensemble Asamisimasa.

Too many preformed ideas

It is time for a tentative conclusion.

It is possible, then, to create political music theatre today?

“Overly agitational music theatre is probably a lost genre,” Haugen says. “I don’t think audiences are able to reflect if you don’t allow them to. There is no room for them to think when everything is served to them on a plate. A lot of political theatre espouses preformed ideas: ‘this is what you should think’.”

Haugen has more ambitious goals for the four music theatre performances at the heart of The Use of Human Beings.

“Generally speaking, it’s one of the few opportunities you have to articulate content that’s not just music. My approach is to say ‘this is how it is, and you can think whatever you want about it’.”

How important is it to you that a theatre performance contains meaning as well as entertainment?

“I like it when there is some thinking behind a performance. I’ll take the programme home with me, do some googling and reflect on what I’ve seen – not just think ‘the world is f***ed up, and that’s bad’. I appreciate it when someone has given some thought to what they are presenting,” says Bjørn Erik Haugen.