When, as a student, Henrik Hellstenius encountered the workaday routine of a composer, he repeatedly put his foot in it and fell flat on his face. Professor Henrik Hellstenius is determined not to let this happen to his students.

“I made so many mistakes. Stupid blunders which I later thought it must be possible to make before graduating.”

Henrik Hellstenius’s work embraces opera, dance, theatre, visual art, orchestral and solo works, electronic music and video work. For the most part this experience of his, which has been hard come by, is about the encounter with other forms of arts. The professor is passionate, therefore, to have his students exposed to art forms other than his own while still studying. He feels it is important to show that the composition studies at the Norwegian Academy of Music (NMH) involve rather more than just composing.

“We need to ask ourselves whether we at NMH can talk about the concept of art. It’s problematic for many people: are we training artists or training craftsmen? People get uncomfortable whenever I broach the subject, but it’s a discussion we need to have,” Hellstenius believes.

“It’s about the way you relate to the art world, which musicians and composers are part of,” the composer and professor feels.

“When I’m working with other educational establishments, like the Oslo National Academy of the Arts (KHiO), this is not an issue; among musicians it’s a much more fuzzy issue. Musicians can exist in their own bubble. All branches of art have their bubble, but ours is even more isolated because we have a huge set-up with early educational facilities, concert halls, orchestras, ensembles and festivals. As a result, we can live in the bubble without relating to the world of art going on around us.”

The top photo shows composition students at NMH and students from the University College of Dance Art collaborating during the festival Lyden av Musikkhøgskolen, in the Norwegian Opera House, 27 March 2017.

“We need to ask ourselves whether we at NMH can talk about the concept of art. It’s problematic for many people: are we training artists or training craftsmen? People get uncomfortable whenever I broach the subject, but it’s a discussion we need to have." 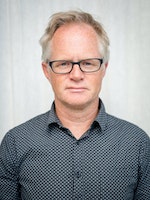 Another big “reason why”, according to the professor, is precisely the division between artist and craftsman:

“I think the aim is to train artists majoring in composition. I realise the concept is a difficult one and not everyone becomes an artist, but I do it for a rhetorical reason: It’s an important objective to train musicians and composers who can reflect, and who are performers and creators. Being reflective involves more than just reproducing. Creating art is about thinking as well. There’s no end of clichés about ‘the composer communing with nature’ and returning home with music, about it being a purely intuitive act. But this is a two-sided process: creating something also requires one to reflect on why one does what one does, and to see oneself and one’s world in a broader artistic context.”

Do you wish to study composition at NMH?

Read more about our study programmes in composition

When Hellstenius left NMH in the 1980s, he had worked exclusively on music. The reality he encountered was a close collaboration with dancers, theatre people, visual artists, writers and dramatists, among others.

“I hadn’t been exposed to any of this through my studies. I want that transition to be less abrupt. I want to prepare my students better for a professional life as composers and musicians wherever they are working in constellations with authors, dancers, actors, and video and visual artists. It’s a natural part of studying music,” Hellstenius notes.

The options available to modern-day students are completely different to the ones he himself was offered, he says.

“Collaboration with many other art forms is a key part of our studies. We have two stages to the Bachelor’s degree. In our first section we have a collaborative project with another art programme every year. The one that has lasted longest is with the University College of Dance Art. Their dancers and our students work to put on a small show from scratch. The dancers have to make sounds; the composers also have to move around. In the process, the composers learn about movement and space, and the dancers learn about sound. This autumn we’re collaborating with the National Academy of Opera and the Academy of Theatre. I think it’s going to be a permanent form of collaboration. In addition we have collaborative projects with the Norwegian Theatre Academy in Fredrikstad, and the Design Department and Academy of the Arts at KHiO.”

Must dare to make demands

He himself had to learn the relationship between music and text, music and movement, image and music, and how music fits into various contexts — when not standing alone.

“The fact is that we have limited resources in our senses, so we cannot make overly complex music when it has to interact with something else. Then the music can’t occupy the same space as in a work for the concert hall. You can’t write as complexly and richly as when you’re working with concert music.”

At the same time, Hellstenius thinks composers must not become too cautious, either.

“I can make demands of the other art forms. I’m not just there to accompany dance or theatre; the music has an intrinsic value, and is not just meant to add colour in the background. It has to be a genuine collaboration. For my part I wish I’d been more aware of that before I left NMH.”

Do you get the impression that other musicians are aware of this?

“As I see it — and this is a sweeping generalization — many people make the same mistakes. Film music is automatically assigned a background role, after all. That’s something we have to challenge. We’re musicians and composers, and we have to uphold the value of music,” he says. Hellstenius feels that responsibility is particularly important now.

“We’re living in an age with an extremely strong visual and linguistic culture. Music is something many people have as a backdrop – have in their ears all the time. We need to champion our art in the encounter with other art forms.”

Freer roles when collaborating with others

Hellstenius draws on his own experience and network in his work with students.

“In the case of the composition department, it’s based very much on my own artistic practice and that of my colleagues. We use authors, dramatists, directors, choreographers and dancers with whom I and other teachers on the composition course have worked professionally to set up projects for their students and ours together,” he says. The professor thinks that the interdisciplinary dimension gives the students an advantage.

“Many people have a eureka moment when working on these projects, and a number of the collaborative ventures have led to people continuing to team up after their studies."

“When they embark on the projects I get them involved in, which are interdisciplinary, they often perceive themselves as different and freer in an artistic role than when they’re ‘just’ musicians or composers.”

He thinks the vast majority of students enjoy the interdisciplinary collaborations and the challenges they have to face, but admits it’s not everyone’s cup of tea.

“Many people have a eureka moment when working on these projects, and a number of the collaborative ventures have led to people continuing to team up after their studies. But not everyone wants that; some think the idea sucks. They just want to write music, and that’s quite straightforward.”

Can you live in a bubble and not relate to other art forms?

“Precious few can. When I think of colleagues, there are almost none who haven’t worked with some other art form.”

What do you yourself get out of such collaboration?

“At times it’s an extremely important part of the motivation to be involved in music at all. I’ve done opera and theatre, staged concerts, done personal portraits of musicians, integrated movements into my scores and integrated language into my scores. For me, working with other art forms is an integral part of the compositional aspect.”

The audience wants to hear the difference

So what about cultural life in general? Will composers and musicians working on a more interdisciplinary basis be a bonus for the quality of what is being created in cultural life? Henrik Hellstenius thinks so.

“This is my thesis: the collaborations are there anyway; all learning hinges on trial and error. The same dynamic applies to collaboration with other art forms. Those students who have been exposed to such collaboration are better, more sophisticated, more interesting artistically.”

Do you think the audience notices when the art forms don’t match up?

“Yes. They’ll notice there’s a sort of imbalance. Maybe they won’t manage to hear what is going on because it’s too dense, too fast, too complex,” Hellstenius says, emphasising that there is no formula for how the art forms should interact.

“Having things match is not the point; now and then, the contrasts are the really interesting thing, surely. It’s altogether impossible to say what is right, but I have a litmus test: if I leave a show and have to use my emotional and intellectual apparatus to carry on mulling over what I’ve experienced – and it takes a while – then it’s been successful. But if I leave thinking ‘that was just weird’, there was an imbalance between the artistic expressions that came across as unintentional, then something is not quite right.”

When things pan out for the students

According to Hellstenius, it is not uncommon for students to get it spot on.

“That’s why being a teacher is so enriching. Suddenly they do something that just ... goodness me, is that possible?! Often it’s not altogether happenstance and out of the blue. It’s things they’ve been working away at and had feedback about. I’ve had many a good experience with student works, purely musical works as well as collaborative works that our students have done in partnership with students from other branches of art. A good example is the shows involving music and movement put on by our first-stage students this spring under “The Sound of the Academy of Music”. Many of them enjoy working with other art students, and it’s important for NMH to showcase this and show we’re busy doing it.

“That’s why being a teacher is so enriching. Suddenly they do something that just ... goodness me, is that possible?! Often it’s not altogether happenstance and out of the blue."

Spoken text is most difficult

What is the most difficult art form to work with?

“Music is an abstract art form; you can’t see it, touch it. Working with other abstract art forms is easiest — dance, for instance, which has no words. Most challenging is language, text, either in the theatre or in other settings. It’s so saturated and complex, and requires so much attention. That’s why I’m so preoccupied with it myself; it’s terribly difficult to accomplish. I’m deeply fascinated by it.”

Spoken text or sung lyrics too?

“Singing often weakens the semantic content. You may well hear a song without understanding the words. It’s the spoken or written text that is difficult.”

Is making music just for the sake of music “the easy way out”, do you think?

“No,” is Henrik Hellstenius’s forthright reply. “It’s extremely important that the compositional line cuts both ways. It’s difficult to make music in its own right. For my own part, I think I’ll have to reach at least a hundred, and then I may manage to make one piece that is good,” Hellstenius concludes.